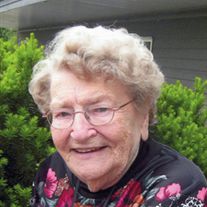 Wilma P. Cavanaugh, age 92, of Coloma, passed away Thursday evening, February 19, 2015 at Wild Rose Community Memorial Hospital. She was born May 4, 1922 in the Township of Springfield, Marquette County, the daughter of Charles and Ida (Buchholz) Ristau. She married Howard Bagley and he preceded her in death. Later, she married Frank Cavanaugh in 1973. He passed away in 1983. A lifelong area resident, Wilma loved being with her family and friends. She also enjoyed being an artist, dancing, and traveling. Wilma was a longtime faithful member of Prince of Peace Lutheran Church in Coloma. She is survived by one daughter, Kathleen (James) Farrell, Denton, TX; one son, Donald (Janet) Bagley, Coloma; a daughter-in-law, Carol Bagley, Coloma. She is further survived by numerous grandchildren, great grandchildren, great-great grandchildren, other relatives and many dear friends. In addition to her husbands, she was preceded in death by her son Edward Bagley; her parents; and by one brother, Armand Ristau. Funeral services will be held on Tuesday, February 24, 2015 at 1:00 p.m. at Prince of Peace Lutheran Church in Coloma with Rev. Robert Hanson officiating. Burial will be in Prince of Peace Lutheran Cemetery. Visitation will be held on Tuesday at the Church from 11:00 a.m. until the time of services.


To order memorial trees or send flowers to the family in memory of Wilma Cavanaugh, please visit our flower store.