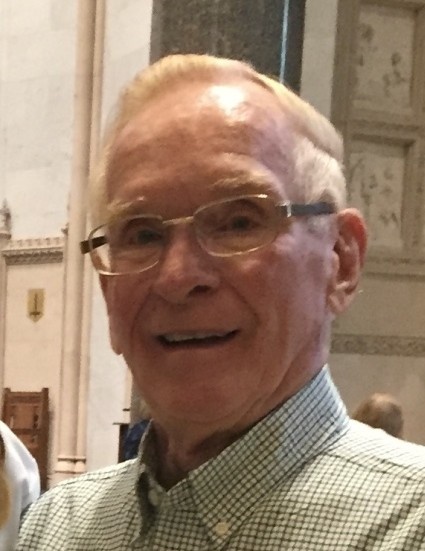 William James Sharp, 82, of Neshkoro, WI, formerly of Streamwood, IL. went to join his savior on January 28, 2020 at his home. He was born on February 9, 1937 in Brooklyn, New York to Anna Mae (Powell) and William James Sharp.  He grew up in Morris Plains, New Jersey and following graduation joined the United States Navy for three years.  He began airline school while in the Navy because of his love of planes and upon his discharge from the service was employed at Chicago Helicopter Airways.  It was here that he met and then married his wife, Helen Wulf, on April 28, 1962.  He later went on to work as an air freight agent for United Airlines at O’Hare International Airport for thirty-three years before retiring.  After his retirement he and Helen moved to Silver Springs Lake in Neshkoro, WI.

Happily married for fifty-seven years Bill and Helen enjoyed a lot of travelling adventures together.  He enjoyed countless hours of fishing and giving pontoon boat rides to family and friends.  Many fond memories were made with “Poppee” and his grandchildren at the lake.  Bill was a WWII “buff”, with a large collection of replica planes.  He also enjoyed bowling and flying kites.

He was preceded in death by his parents; brother-in-law Joseph Mole; sister-in-law’s Jan and Yvonne Wulf; niece Joan Mole and nephew Wade Wulf.

Funeral services will be held on Friday, January 31, 2020 at 11:00 a.m. at Grace United Methodist Church, Wautoma.  Rev. Rafael Cubilette will officiate.  A grave side service and interment will follow on February 1, 2020 at1:30 p.m. at Larchwood Cemetery, Larchwood, IA.

The family would like to extend their heart-felt appreciation to Heartland Hospice for their compassionate care and support.

To order memorial trees or send flowers to the family in memory of William Sharp Jr., please visit our flower store.