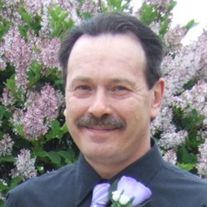 William Leo "Bill" Meyers, age 56, of Richford, passed away unexpectedly from a heart attack Friday morning, January 3, 2014.
He was born December 13, 1957 in Milwaukee, the son of Leo and Fern (Olson) Meyers. He married Veronica R. Harrings on December 7, 1985.
Bill was a loving and caring husband, father, grandfather, and brother. He was very hard working. He was employed at Brakebush Brothers, Inc. for 13 years. He enjoyed being with family and friends, fishing, camping, hunting, and playing cards.
He is survived by his wife Veronica R. Meyers. His children: Matt (Lynn) Kiedrowski, Miriam (Dan) Schimelpfenig, Melissa (Tyler) Jazdzewski, Michelle (Trevor) Hoffmann. His grandchildren: Isabella, Ethan, Eli, Ian, and Conner. His brother and sisters: Nancy (Lee) Szcyubialka, Karen (Dave) Meyers, Judy (Mark) Barbian, Charles (Mary) Meyers, Joanne Szymanski, Sally (Rick) Meyers, Penny (Joel) Christensen. He is further survived by nieces, nephews, other relatives and many special friends.
He is preceded in death by both parents.
Memorial Services will be held on Thursday, January 9th at 11am at the United Methodist Church, Plainfield with the Rev. David Leistra officiating. Visitation will be held on Wednesday January 8th from 4-7pm at the Leikness & Stahl Funeral Home, Plainfield and from 10am Thursday until the time of services at the church. In lieu of flowers a memorial has been established in Bill's name. The Leikness & Stahl Funeral Home assisting the family with arrangements, www.plainfieldfuneralhome.com


To order memorial trees or send flowers to the family in memory of William Meyers, please visit our flower store.