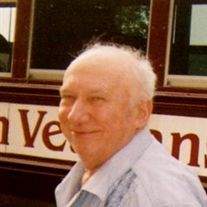 William "Bill" Ferdinand Konitzer, age 89, a resident at Wisconsin Veteran's Home, King since 2002, died Friday, December 5, 2014 at Riverside Hospital, Waupaca. He was born in Milwaukee on December 1, 1925 to Theodore and Elizabeth (Mayer) Konitzer. He grew up In Thiensville. Bill never graduted high school,but he did go back several years later and earned his high school equivalency diploma. William worked for Chicago Northwestern Railroad. On June 22, 1944 he entered the U.S. Army and served in the European Theatre during WWII and was honorably discharged in July of 1946. While in France he met Marguerite L. Jardin and they were married on April 17, 1947 and preceded him in death in February of 1982. He then met Dawnine Swalheim and was married in February of 1986 and she preceded him in death in September of 2001. Throughout Williams life he lived in Burnett after the war, Wautoma from 1948-1963 and the Watertown area. William was a member of the V.F.W., American Legion, Order of the Brown Scapular and past member of St. Joseph Catholic Church. He was an avid Brewer and Packer Fan.

Mass of Christian Burial will be held at 11AM on Thursday, December 11, 2014 at St. Joseph Catholic Church, Wautoma. Officiating at the Mass will be Father David Greskowiak. Burial will take place at Calvary Cemetery, Wautoma with Military Honors accorded by the Wolman-Minskey American Legion and The United States Army Honors Team. The family will greet relatives and friends at church on Thursday from 9:30Am until the time of Mass at 11AM.


To order memorial trees or send flowers to the family in memory of William Konitzer, please visit our flower store.