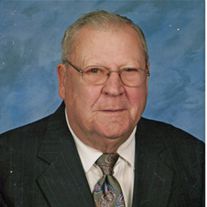 Bill was employed as an assembler at Speed Queen in Wautoma and later Ripon for 43 years until his retirement. He was a member of Trinity Lutheran Church in Wautoma and he was a longtime member of the Wautoma Volunteer Fire Department. Bill loved being with his family, camping, tinkering around the house, fishing, gardening and woodworking.

In addition to his wife, he was preceded in death by his son, Duane Deuel; his daughter, Pamela Clark; and by four brothers, Frank Deuel, Lloyd "John" Deuel, Roland Deuel, and Allan Deuel.

Funeral services will be held on Monday, July 21, 2014 at 11:00 a.m. at Trinity Lutheran Church in Wautoma with Rev. Brian D. Rohde officiating. Burial will be in Wautoma Union Cemetery.

Visitation will be held on Sunday from 4:00 until 7:00 p.m. at Leikness Funeral Home in Wautoma and on Monday at the Church from 10:00 a.m. until the time of services.

To order memorial trees or send flowers to the family in memory of William Deuel, please visit our flower store.