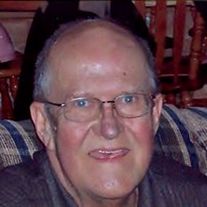 Wayne Eugene Wright, age 73 of Wautoma, died Sunday, April 6, 2014 at his home surrounded by his family, following a courageous battle with cancer. He was born on March 9, 1941 in Milwaukee to Benjamin and Nora (O'Leary) Wright. On May 18, 1965 he married Shirley Lockhart in Virginia. Wayne worked at Midwestern Farms in Plainfield for 38 years. He enjoyed the Green Bay Packers, loved hunting and fishing. Wayne loved his grandchildren and taking them to church on Wednesdays. He was a devoted member of Crossroads Family Church. Wayne always had a sense of humor and will be sadly missed by his family and friends.

Funeral services will be held at 11AM on Thursday, April 10, 2014 at Crossroads Family Church, Wautoma. Officiating at the service will be Pastor Dan Carlson with burial to follow in Plainfield Cemetery. The family will greet relatives and friends at church on Thursday from 9:30AM until the time of service at 11AM.

The family would like to thank Aurora/Davita Dialysis Center, Vince Lombardi Cancer Center and Heartland Hospice for the care and compassion given to Wayne.


To order memorial trees or send flowers to the family in memory of Wayne Wright, please visit our flower store.