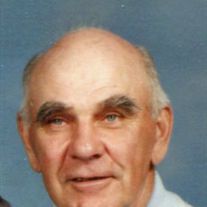 Tom spent his early years on the family farm near Bean's Lake in Wautoma, and as a logger in the north woods of Wisconsin. After his 1944 marriage, Tom served in the US Army as a member of the 88th Infantry Division of the Blue Devils, stationed in Italy during WWII. After his discharge, he and Dorothy farmed for H.P. Reiger (current Camp LuWiSoMo) in Wild Rose until 1954 when they bought the Call-A-Gan restaurant in downtown Wild Rose, which they operated until 1976. Until his retirement, Tom worked for the Waushara County parks system.

In addition to operating the restaurant for 22 years, Tom wore many other "hats". He started a Christmas tree business in the 50's which lasted until 2013; sometime in the 60's he added a grave digging service for many of the Cemetery Associations (his son Randy continues to operate this business). Tom was the driver of the local ambulance back when the "ambulance" was his family station wagon, he converted 4 acres of land into a golf driving range, he served as the Chairman for the Town of Rose for more than 32 years. Without a doubt he always had some kind of project going on.

Not only was Tom resourceful, he was involved in his community and family, a member of the Church council, sexton for the Mt. Pleasant Cemetery Association, and a member of the American Legion for close to 60 years. In his younger days he was a hunter, always loved to fish, and when he had some free time, you could find him busy in his "Antiques Made Daily" workshop, where old wagon wheels and barn board were transformed into wagons, carts, benches and other creative treasures.

In a addition to his wife, he was preceded in death by his parents, his daughter Linda, five brothers, Frank, Edward, Joseph, Raymond and George, and six sisters, Anne Marini, Stella Kaczmarek, Helen Olkiewicz, Gertrude Grunewald, Loretta Howard, and Grace Fondell.

Funeral services will be held on Saturday, July 19, 2014 at St. Joseph's Catholic Church, Wautoma. Visitation starts at 9:00 AM, Mass at 10:30 AM, with Rev. David Greskowiak officiating. Burial with full military honors will be at the Mt. Pleasant Cemetery, Wild Rose.


To order memorial trees or send flowers to the family in memory of Thomas Mankowski, please visit our flower store.