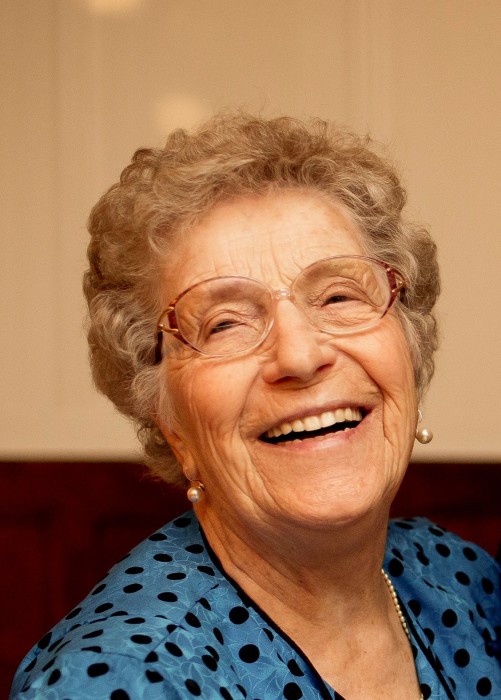 Theresa Hauschild, age 90, of Neshkoro and Wautoma passed away peacefully in her sleep on Monday, September 18th, 2017, following complications from a recent fall and hip surgery. Theresa was born on July 22, 1927 in Kikinda, former Yugoslavia, daughter of Katharina (Bauer) and Johann Renji.  After WWII, as a 21 year old, she immigrated to French Quebec Canada in 1948.  She was a “Displaced Person” (refugee) and was sponsored by a Doctor’s family, working as a house keeper and nanny.  She met her first husband, Edward Belusa in 1949 and they were married that same year in Kitchener, Ontario.  They immigrated to Milwaukee, WI with their three children in October of 1960.   Several years later, Theresa and her children moved to Shorewood, WI where she worked as a dietary aide at Columbia Hospital. In 1970 she married Hans Hauschild. They lived on the West side of Milwaukee where Theresa then worked at St. Joseph’s Hospital for 20 years as a Laboratory Aide. Hans and Theresa were an amazing, hardworking industrious team.  After retirement, together they built their retirement home on 13 acres in rural Neshkoro. Nestled into a hillside, is their lovingly designed Bavarian style white washed home. They were outstanding role models for gardening, canning, and being the recycle King and Queen to many people. They celebrated their 47th wedding anniversary this past July on Theresa’s 90th birthday at Heartland House, in the Memory Care unit, her primary residence for 5 years in Wautoma.

Theresa in her younger years was able to speak 5 languages. Although her formal education in Yugoslavia was short due to World War II, she taught herself to read and write in French and English, a woman of immeasurable strength and determination. Through her faith, hard work ethic, care and compassion for others she will remain a role model for us all.   She touched countless lives with her spirit of generosity, food, and relentless love.

Theresa was an active member at Hope Lutheran Church in Wautoma since 1993.  She attended church regularly while at Heartland House.  Her husband Hans and close family friend Sharon Dustin would take her to church.  When she was no longer able to go to church, the church came to her.

She was preceded in death by her sister, Susanna Huras and brother Franz Renji.

The Celebration of her Life will be held on Saturday, September 23rd at Hope Lutheran Church, 301 E. Mt. Morris Ave., Wautoma, WI.  Viewing at 1:00 p.m. service to follow at 2:00p.m.  Theresa will be laid to rest at Hope Lutheran Cemetery.

“Our wonderful Omi, whose sole purpose in life was to tend to others has found her place with God.  She always put others first and made them feel like a million bucks.  They say in heaven you regain that which you lost on earth.  Maybe eye sight, ability to walk…in her case it was her memory.  I am glad that it is restored for her now because she provided so many loving memories to those who knew her. Now you can dance and sing again, Omi!”

In lieu of flowers, donations can be sent to www.alz.org.  Click on donations in memoriam of Theresa Hauschild

To order memorial trees or send flowers to the family in memory of Theresa Hauschild, please visit our flower store.