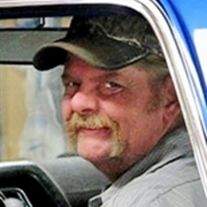 Russell Allen Phillips, age 52, of Plainfield, died unexpectedly on June 11, 2014. He was born on June 5, 1962 in Wild Rose to Gene and Betty (Baker) Phillips. Russell never graduated from high school but many people did not know this from his many talents. After leaving school his life travels started from there. Working as a farm hand for Madden Farms, as a mechanic for Plainfield Trucking and then spreading his wings wider, he hit the road as a truck driver. Wanting to be closer to his loved ones, he expanded into logging and turned down the final road opening Phillips Garage as an auto mechanic. "Just Living The Dream."

Russell teamed up with Bonnie Morris and her son, Cody, and together they continued the massive road trip with him the rest of his journey. Russell deeply enjoyed spending time with his family and many, many friends that he acquired along the back roads, especially his road brother, Charlie and becoming a valued member of the Drexler Family. Russell enjoyed escaping to the open road on his Harley, refurbishing his El Camino but mostly lending a helping hand to anyone he could help.


To order memorial trees or send flowers to the family in memory of Russell Phillips, please visit our flower store.