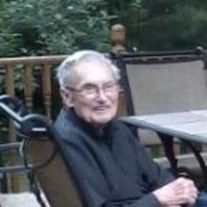 Russell Duane Madson, age, 91, died at home surrounded by his family, following a short battle with cancer. He was born on October 1, 1922 in Iola to Roger and Ruby (Peterson) Madson. After high school, Russell entered the U.S. Army Air Force in November 1942 in Waukegan, IL, completed basic training in Atlantic City, NJ and switch board school at Camp Crowder in Neosho, MO. While Russell was stationed in Neosho, MO, he married Cecelia M. Proft on April 24, 1943. Russell taught Air Borne Radio for the B-17 crews until the end of WWII and was honorably discharged. He then went to work for Western Electric Company/AT&T based out of Milwaukee as an Electrician/Supervisor and retired after 46 years. The couple then retired to Coloma where Russell enjoyed gardening, hunting, fishing, sports, including NASCAR and Brewers, spending time with his family and caring for many animals around his home.

Funeral services will be held at 12PM (NOON) on Tuesday, September 30, 2014 at Prince of Peace Lutheran Church. Officiating at the service will be Pastor Robert Hansen with burial at Prince of Peace Cemetery, Coloma with Military Honors accorded by the U.S. Air Force Honors Team and American Legion Post 343. The family will greet relatives and friends at church on Tuesday from 10AM until the time of services at 12 (NOON). Leikness Funeral Home, Wautoma is assisting the family with arrangements. www.wautomafuneralhome.com

In lieu of flowers, memorials may be made in Russell's name to a Hospice Organization of choice or to the American Cancer Society.


To order memorial trees or send flowers to the family in memory of Russell Madson, please visit our flower store.