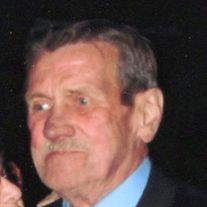 He was born September 16, 1931 in Milwaukee, the son of Walter and Lorraine (Berner) Henkel. He married the former Lois S. Thompson on November 1, 1953 in Milwaukee. She preceded him in death on March 23, 2014 after 61 years of marriage.

Robert served his country in the U.S. Army during the Korean War from 1952 until 1954. In 1992, he retired from Ampco Metal of Milwaukee after 38 years of service. After retirement, he and his late wife moved to Redgranite. He was a member of the National Rifle Association, and had a great love as an outdoorsman.

In addition to his wife, he was preceded in death by his parents.

Private family services will be held at a later date. The family extends heartfelt appreciation to Rosemore Village and special caregivers. Also, thanks to Agnesian Hospice for their compassion and care.

To order memorial trees or send flowers to the family in memory of Robert Henkel, please visit our flower store.