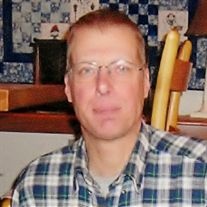 He was born November 25, 1955 in Gary, Indiana the son of Thadeus "Ted" and Elaine (Maihofer) Rychtanek. He married Janet K. Pinter on May 8, 1982 at St. Joseph Catholic Church in Wautoma.

Rick was a 1974 graduate of Wautoma High School. He operated Richard's Electric of Wautoma from 1980 until 1997. He was then employed at Mid-State Supply in Wautoma until 2007. Rick was a Master Electrician for Shoemaker Electric at the time of his death. He will be remembered for his love of the outdoors. Rick enjoyed farming, bow hunting, golfing, and cutting wood. He was a longtime member and current president of Wautoma Lions Club. Rick was a former member and past president of Wautoma Kiwanis and he served on the Board of Waushara Country Club. He was a member of St. Joseph Catholic Church.

He was preceded in death by his parents; one sister, Sandy Staudenmaier; and by his father-in-law, Donald Pinter.

Relatives and friends may greet the family at the Church from 4:00 p.m. until the time of services. In lieu of flowers, a memorial is being established.


To order memorial trees or send flowers to the family in memory of Richard Rychtanek, please visit our flower store.