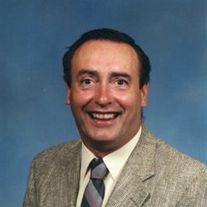 He was born April 9, 1936 in Chicago, Illinois, the son of Joseph and Florence(Poteracki) Przybylski. He married Barbara Ann Kolodziejczak on May 19, 1962 in Chicago.

Richard served his country from 1954 until 1957 in the United States Navy aboard the USS Goodrich and later the USS Monongahela. He will be fondly remembered for his countless hours of volunteer work at the Wisconsin Veterans Home in King, WI. Richard was a member of Rogers/Oestreich American Legion Post 343 Hancock/Coloma, Redgranite Amvets Post 13, Disabled American Veterans and Disabled American Veterans Auxiliary Chapter 30 of Stevens Point. He belonged to Plainfield VFW Post 6007, Plainfield Cooties Pup Tent 38, Knights of Columbus Chain'O Lakes Assemble 1862 of Waupaca and Sacred Heart Council 6228 Knights of Columbus of Wautoma. Richard was a member of St. Joseph Catholic Church in Wautoma.

He was preceded in death by his parents; his sister and brother-in-law, Barbara (Robert) Kledzinski; and by his brother and sister-in-law, Conrad (Aleida) Przybylski.

A Mass of Christian Burial will be held on Saturday, October 11, 2014 at 10:30 a.m. at St. Joseph Catholic Church in Wautoma with Rev. David Greskowiak officiating. Military honors will follow outside the Church. Burial will be at Wisconsin Veterans Memorial Cemetery at King, WI.

Visitation will be held on Friday from 4:00 until 7:00 p.m. at Leikness Funeral Home in Wautoma and on Saturday at the Church from 9:30 a.m. until the time of services. A parish prayer service will be held at 6:45 p.m. Friday at the funeral home.

To order memorial trees or send flowers to the family in memory of Richard Przybylski, please visit our flower store.