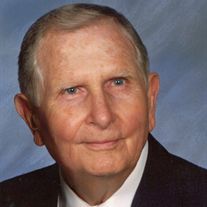 Richard R. Harris, 86, passed away peacefully May 1, 2015 after a 2 year battle from complications of post-polio syndrome.

Richard was a Veteran and served his country during the Korean War.

He lived his life as he ended each prayer. . . "Help us always to help others".

Richards life was one of service to others and community. Prior to his recent battle with post-polio at age 84, he was still working full time for CVI (Center for Veterans Issues) covering 5 counties in Central Wisconsin as the Job Developer for the Homeless Veterans Reintegration Program.

He was a staunch advocate for veterans, migrants, people of low income and the underserved. During the 23 years he lived in Wautoma he was Manager of the Waushara County Job Center, Outreach Coordinator for UMOS (United Migrant Opportunity Services), President of the Waushara Area Chamber of Commerce and instrumental in starting the Wautoma food pantry.

He is survived by his wife and best friend of 26 years, Geri.

He is preceded in death by his youngest daughter, survived by two daughters & spouses, three grandchildren & spouses and five great-grandchildren that will miss him with all their heart.

He will also be missed by his sisters-in-law, brothers-in-law, their families and many dear friends.

To those of you who worked with, attended a meeting or knew him personally, you know he ALWAYS had his cup of coffee with him, so in lieu of flowers, take time to buy someone a cup of coffee and get to know them just a little bit better.

Private family services will be held.


To order memorial trees or send flowers to the family in memory of Richard Harris, please visit our flower store.