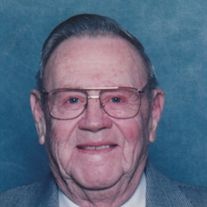 Richard E. "Dick" Graichen, age 95, of Coloma, passed away Sunday, Sept. 28, 2014 at Aurora Medical Center, Oshkosh, with his beloved Packers on the television in his room.
He was born Nov. 24, 1918 in Coloma, the son of Gustav and Minnie (Lindke) Graichen. He graduated from Coloma High School on May 29, 1936. He served his country as a Navy Seabee during World War II from November 28, 1942 until November 14, 1945.
Dick worked for the US Postal Service in Coloma, first as the Postmaster and then as a rural carrier until his retirement in 1980. He married Joyce Leach on May 28, 1958. They raised their family in Coloma and moved to Leesburg, FL after retiring. Dick enjoyed watching the Packers, Brewers,
Wisconsin Badger football games and attending any sports his children, and later grandchildren, were competing in. He also enjoyed playing cards, dancing and socializing with family and friends.
He is survived by sons: Richard (Teresa) and Fred (Sue); stepson: Vince (Charlene) Leach, daughters: Gay (Mark) Meinke, Heidi (Eric) Olsson, stepdaughter: Carol (Bill) Anderson; 12 grandchildren, Richard (Vicki) and Shawn (Tara) Meinke, Quinn Leach, Michelle (Chad) Harnisch, Gretchen (Brent) Bailey, Justin (Jillian) Olsson, Adam Olsson, Sara Olsson, Samantha
and Ben Graichen, Jessica and Alex Graichen; eight great grandchildren,
many nieces, nephews, other relatives and friends.
Dick was preceded in death by his wife, Joyce; three brothers, Carl, Walter and Fred Graichen; one sister, Martha; an infant daughter, Kim Louise and his special friend, Beatrice Kitchen.
As per his wishes, Dick's children and grandchildren will say goodbye to him privately at Leikness Funeral Home on September 30, 2014. www.wautomafuneralhome.com


To order memorial trees or send flowers to the family in memory of Richard Graichen, please visit our flower store.