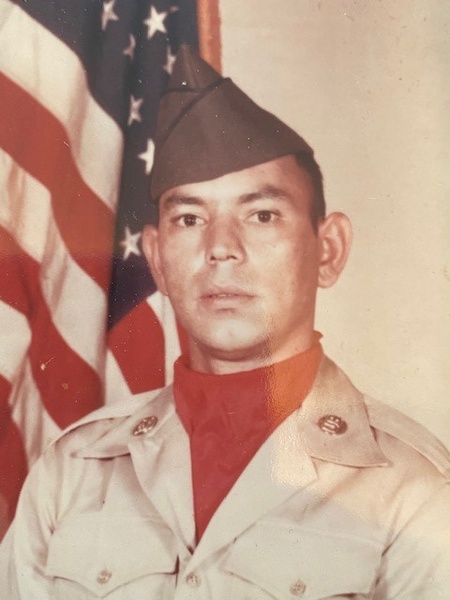 Reymundo “Ray” Rodriguez passed away peacefully in his sleep on October 27, 2021 at the age of 79. His battle with serious medical issues in the recent years showed his never ending courage in facing life’s challenges.

Ray was born in Mission, Texas on January 5, 1942 to Simon and Maria Vasquez-Rodriguez.

Ray served in Vietnam as an Army Combat Engineer with Company B 818th Engineer Battalion. He was very proud that he was able to serve his country and loved to tell stories of the many friends he made there and how he learned so much. During his time in the service, a mutual friend found him a pen pal to occupy some of his time. He began to write to Amada “Amy” Montoya and soon after his return home he proposed to her and they were married on September 15, 1968. During their 53 years of marriage they raised two daughters Melissa Rodriguez-Voelkner and Belinda Peterman. He loved being a grandpa to his two granddaughters, Madeline and Abigail Peterman and spoiled them like only the best of grandpa’s could.

Ray worked many years as a mechanic and retired from Nelson Muffler in Wautoma.

During his years of residing in his beloved town of Coloma, he stayed active in the community by serving on the Village Board and acting as a volunteer fireman. Ray loved to play softball and spend time with his many friends. He will always be remembered for his jokes that went nowhere and his gift of gab.

Ray will be forever missed by his family and will be remembered for his big heart, his dedication to working and playing hard. Thanks Dad for instilling all of these life lessons. We love you.

He was preceded in death by his parents, three brothers, Rudy, Danny and Ray and one nephew Daniel.

The Rodriguez Family would like to thank the Heartland House CBRF Staff and his friends he made while residing there. You all brought comfort during the time we all needed it.

Visitation will be held Sunday, October 31 from 6-7 p.m. at Leikness Funeral Home in Wautoma, WI. Burial will be held on Monday, November 1 at 11 a.m. at the Hillside Cemetery in Coloma, WI.

Memorials may be made to the American Legion Post 343 420 North Jefferson, Hancock, WI 54943. (hancocklegionpost343.org)

A Life Celebration will be hosted at a later date.

“In the end, it’s not the years in your life that count. It’s the life in your years” – Abraham Lincoln

To order memorial trees or send flowers to the family in memory of Reymundo "Ray" Rodriguez, please visit our flower store.