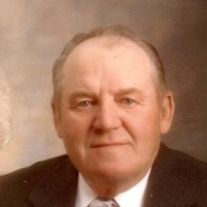 He was born May 5, 1923 in the Town of Mount Morris, the son of Theodore and Clara (Reierson) Jarvis. He married the former Arlene Joyce Bartleson on June 5, 1948 in Saxeville. She preceded him in death on January 17, 2014.

Raymond attended Guernsey Dale School in the Town of Mount Morris and later graduated from Wautoma High School in 1941. He worked as a Milk Tester before entering the United States Army in 1943. He participated in the Pacific Theater during World War II serving in New Guinea, the Philippines, and Japan until being honorably discharged on January 2, 1946. Ray was a lifelong farmer on the family homestead in the Town of Mount Morris and loved helping his four sons on their farms. He enjoyed stone masonry as a hobby. Ray also enjoyed taking part in the Waushara County Fair and was proud of his family's participation.

Ray was a faithful member of Mount Morris Holden Lutheran Church where he served as council president. He was a 60 year member of the Farm Bureau and also a member of Adams-Columbia Electric Board of Directors. Ray served on the Mount Morris Town Board and was 4-H leader for the Mount Morris Pioneers. He was a member and Past Master of Wautoma Masonic Lodge #148 F. & A.M.

In addition to his wife, he was preceded in death by his parents; his brothers, Donald Jarvis, Robert "Bob" Jarvis, infant brother, Vernon; and by one sister, Luella (Kermit) Apps.

Funeral services will be held at 1:00 p.m. on Wednesday, Nov. 12, 2014 at Mt. Morris Holden Lutheran Church with Rev. Barbara Girod officiating. Burial with full military honors will follow in the church cemetery.

The family expresses heartfelt appreciation to the staff of Preston Place in Redgranite and Agnesian Hospice Hope of Green Lake for their care and compassion.

To order memorial trees or send flowers to the family in memory of Raymond Jarvis, please visit our flower store.