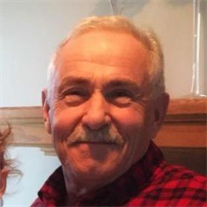 Raymond D. Honl, age 74, of Wautoma, passed away on Saturday, January 21, 2017 at his home. He was born in Oakes, ND on May 2, 1942 to Bernard and Irene (Baker) Honl. In 1952, the family moved to Wautoma where they would operate The Silvercryst Resort and Motel for several years. Raymond attended Silver Lake and Wautoma Grade Schools, Graduated from Wautoma High School with the Class of 1960 and then attended U.W. Whitewater where he earned a Bachelor's of Business Degree in 1964. He entered the Army National Guard in January 1965 and was later honorably discharged. On October 20, 1974 he married the love of his life, the former Nancy Woodworth in Wautoma, WI. Raymond worked as the Bar and Motel Manager for many years at The Silvercryst. He later would also work at Brakebush in Westfield where he was employed as a long-haul driver. Raymond enjoyed warm days out in his pool, Honl Family Reunions, watching the Brewers, Packers and Badgers, family fishing trips to Canada, traveling, his dog Molly, but most of all he enjoyed spending time with his family, brothers, sisters and especially his granddaughters Violet and Sydnie who he loved dearly. He will be sadly missed by all who knew him.

Memorial services will be held on Monday, January 30, 2017 at 12PM (NOON) at Leikness Funeral Home, Wautoma. The family will greet relatives and friends at the funeral home on Monday from 10AM until the time of service at 12PM (NOON). www.wautomafuneralhome.com

In lieu of flowers, memorial may be made in Raymond's name to St. Jude Children's Research Hospital. www.stjude.org.

To order memorial trees or send flowers to the family in memory of Raymond Honl, please visit our flower store.