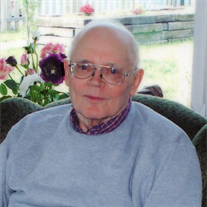 Philip Julian Grothe was born March 15, 1930 to Charles and Agnes Grothe of Hendrum, MN, one of six children. At age 17, he was born again, receiving the Lord Jesus as his Savior during a week of special meetings in Hendrum, MN.

Following high school, he attended the Lutheran Bible Institute in Minneapolis, MN for two years. He then attended Concordia College in Moorhead, MN and graduated with a degree in social work.

On December 27, 1953, he was united in marriage to Delores Moan of McIntosh, MN. To this union were born Diane, David, Donald, and Darlene.

The couple made their home in Crookston, MN for one year and then moved to Thief River Falls, MN where he lived until 2005. He worked as a social worker for Marshall County for 20 years. Philip always loved carpentry work, and in 1976 retired from Marshall County and started Grothe Construction, building and remodeling residential homes for the next 10 years. He also owned and operated rental housing.

He was a member of Our Savior's Lutheran Church, served on the Redby Indian Mission Board, the Association Free Lutheran Congregation's Coordinating Committee, and a member of the Gideon's. He was a faithful man of God, loved reading and memorizing the Bible, discussing the prophecies concerning Christ's second coming, and building things for his children and grand- children. Following the death of his loving wife Delores in 1996, his days revolved around his children and grandchildren. In 2005 he moved to Preston Place and then to Heartland House in 2013, both located in Waushara County, Wisconsin.

Philip is preceded in death by his wife Delores, his parents, Charles and Agnes, two sisters, Helen and Corrine, and by one brother, Roger.

Funeral services will be held at 1:00 P.M. on Saturday, April 2, 2016 at Trinity Free Lutheran Church in rural McIntosh, MN. Burial will be in the parish cemetery.

May his memory be blessed.


To order memorial trees or send flowers to the family in memory of Philip Grothe, please visit our flower store.