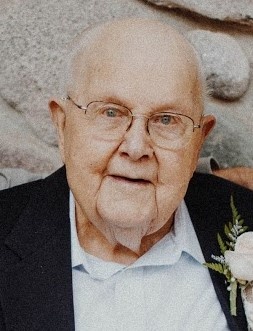 Norbert B. Walejko, age 96, long-time resident of Spring Lake, passed away at Heartland House in Wautoma, WI on November 1st.  He was born in Pulaski, WI to Vincent and Julia (Weir) Walejko on December 25, 1921.  On January 3, 1948, he was united in marriage to Delores Formiller at St. James Church, Neshkoro, WI.

A graduate of Redgranite High School, Norbert went on to attend UW-Madison until December of 1941 when he returned home to enlist in the US Navy in 1942.  He served in the Pacific Theater as a Seabee in the 24th Construction Battalion, earning four battle stars.  After World War II Norbert returned to farming on the family farm in Spring Lake which turned into his life-long vocation.

Norbert was an active member of St. Joseph Catholic Church in Wautoma where he served as parish trustee, a member of the Knights of Columbus, and supported many church projects.

He is further survived by 25 great grandchildren; sister-in-law Barbara (Glen) Smith; and many nieces and nephews.

Visitation will be held on Tuesday, November 13th, from 4:00 until 7:00 PM at Leikness Funeral Home in Wautoma with a vigil service conducted at 7:00 PM.  Relatives and friends may also greet the family on Wednesday at St. Joseph Church from 10:00 AM until the time of services.

A memorial fund has been established in Norbert's memory for the Old Glory Honor Flight.  The family wishes to thank the Heartland House staff for their dedicated care of Norbert over the past two years and Agnesian Hospice Hope for end of life care.

To order memorial trees or send flowers to the family in memory of Norbert Walejko, please visit our flower store.