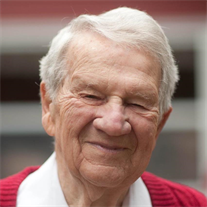 Neil Curt Starke age 96 of Wautoma, formerly of Oshkosh, passed away on Wednesday, January 25, 2017 at Rosemore Retirement Village in Wild Rose. While other snowbirds travel south for warm weather, Neil liked to point out that he traveled north for the winter and enjoyed the warmth of good company and three delicious meals a day at Rosemore. Neil was born on June 22, 1920 to the late Curt and Hazel (Larsen) Starke. He served in the US Coast Guard from 1943-1946. On April 3rd, 1944, during a week's leave, he married Gladys Schuster.

He belonged to the Masonic Lodge 148 of Wautoma, Tyrian Chapter #15, the Scottish Rite, Green Bay, Beja Shrine, Winnebagoland & Mascoutin Shrine Clubs, Gideons International, AARP, and the Town of Newton Fire Department. He was especially proud of being an active Mason for 66 years and a member of the Oshkosh Eagles #267 for 75 years. His father was an Eagle and purchased Neil's membership for his 18th birthday.

First as a firefighter, then as a dispatcher, and finally as Captain Fire Inspector and Arson Investigator, Neil worked for the Oshkosh Fire Department. He officially retired in 1981 but returned to do consulting on a few challenging cases in 1982.

Neil's Christianity and participation in his religious community was of the utmost importance to him. He expressed his values through numerous charitable works and was a proud and active member of the Wautoma-Waushara Senior Center.

In lieu of flowers Neil suggested memorials to St Paul's church, Crystal Lake and the Wautoma-Waushara Senior Center. Thank you from Neil's family to Hospice Hope and the caring staff of Rosemore. A special thank you to his second family along with his amazing friends and neighbors at Lake Sharon who were always so thoughtful and kind and enabled him to live independently at his home.

Funeral services will be held at 1PM on Sunday, January 29th at the Wautoma-Waushara Senior Center, W 8220 Cottonville Ave, Wautoma with the Reverend Blaine O. Niskanen officiating. The service will be followed by a meal and time of fellowship.

Visitation will be held on Sunday at the Wautoma-Waushara Senior Center from 10AM until the time of services. Burial will be in Riverside Cemetery, Oshkosh.

To order memorial trees or send flowers to the family in memory of Neil Starke, please visit our flower store.