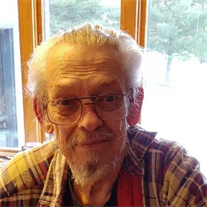 He served his country in the U.S. Navy from 1957 until 1963. Neil and his wife resided in Stoughton for many years before moving to rural Wautoma in 1999. He was employed as Building and Grounds Superintendent by the State of Wisconsin Prison System for 32 years. He enjoyed hunting, fishing, rock tumbling, collecting model airplanes and reading about World War II. He was a member and past commander of Stoughton VFW Post 328.

In addition to his wife, Neil was preceded in death by his parents; by his daughter, Dawn Marie Grimes; and by two brothers, Norman and Carl.

Memorial services will be held on Wednesday, August 17, 2016 at 11:00 a.m. at Leikness Funeral Home in Wautoma. Burial with full military honors will be at Dakota Cemetery, Town of Dakota.

Visitation will be held on Wednesday from 10:00 a.m. until the time of services.

To order memorial trees or send flowers to the family in memory of Neil Grimes, please visit our flower store.