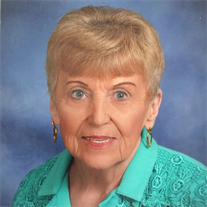 Early in the morning hours of Palm Sunday, March 20, 2016, Nancy J. Deitz, age 77, was taken into the arms of her Lord and Savior, following a short battle with cancer. She was surrounded by her family during her final hours.

Nancy was born in Logansport, IN, February 5, 1939 and married Jerry Deitz in 1955. They moved to Berlin, WI in 1968. Following 13 years of building Jerry's TV and Antenna business, Jerry and Nancy realized their dream of building a home of their own in the woods when they moved to Wautoma. During their life in Wautoma, they were quite active with Trinity Lutheran Church and Nancy worked as a secretary at the church for 7 years. Following Jerry's tragic death in 1999, Nancy lived with her oldest son in Berlin, her youngest son in Butternut, on her own and with her daughter in Neenah for the next 16 years.

Funeral services will be held on Wednesday, March 23, 2016 at 2:30 p.m. at Leikness Funeral Home in Wautoma with Rev. Rick Schroeder of Peace Lutheran Church in Neenah officiating. Burial will be at Marion Cemetery.

Visitation will be held on Wednesday at the funeral home 1:30 p.m. until the time of services. In lieu of flowers a memorial is being established.

To order memorial trees or send flowers to the family in memory of Nancy Deitz, please visit our flower store.