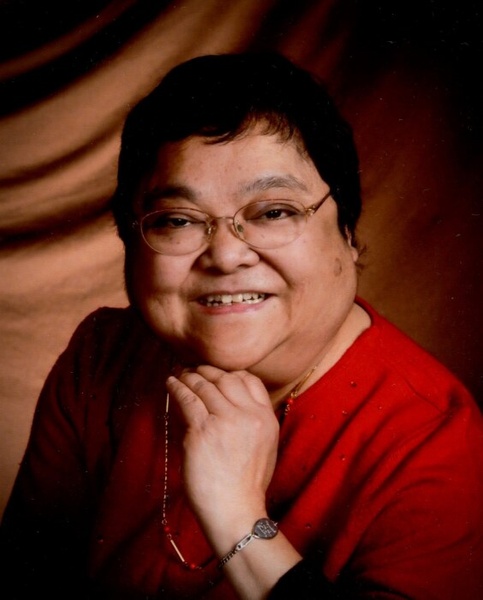 Myrna Ann Schultz age 71 of Wautoma passed away on Monday, August 10, 2020 at Berlin Hospital. She was born on September 29, 1948 in Los Angeles, CA to James and Rita (Focson) Barroga , siblings Jeannie (Adelaide), Kenneth, Victoria, and Norita followed over the years as they settled in to Milwaukee, Wisconsin.

While the family wasn’t devout, or rich, Myrna talked her parents into sending her to Holy Angels Catholic School since she noticed those students seem to have more days off.  Money ran out for all the kids, but Myrna was able to enroll in Carthage College when time came.  She helped develop what little Newman Center the Lutheran college had, planning music, assisting the visiting weekly priests at mass in the former park out house.

She majored in mathematics and minored in Russian literature, in Russian.  She was one of only a couple female students chosen to work with the first computers on campus, programming in those primitive days.

Her adult relationship started when she and Martin Schultz found themselves working in the college cafeteria.  Martin found a woman willing to serve him food and she found a man willing to wash pots and pans; a lifelong partnership that worked, they were married on December 19, 1970.

Myrna worked for Wisconsin Bell for many years.  But she then decided music was more important, if we skip the financial rewards.  She started back to school based in Cardinal Stritch College with various studies and classes at other Roman Catholic colleges in the area including both seminaries.  After her master’s degree was completed, she worked at various parishes, mostly in NW Milwaukee, NE Waukesha, and S Ozaukee County.  She also became a member of the archdiocesan choir where she had the honor to sing with them at a taped Christmas concert nationally broad cast during one Christmas season.

While she didn’t get to travel as much as she liked she went to some computer meetings early on but mostly later traveled summers to music workshops, religious and harp around the country. Medical problems seemed to develop, so she ‘cashed it all in’ and  got property here, had a house built and she loved looking out the windows to hear and see turkeys and many other critters moving about the property. Myrna’s health declined more in spite of a kidney transplant from a loving member of St. Joseph’s parish after moving to this area.

Up to this year she liked fishing with the arrangement still working.  Martin scaled the fish, Myrna filleted and cooked them, and Martin cleaned up the mess. She is missed.

A Memorial Mass will be held at 1PM on September 2, 2020 at St. Joseph Catholic Church. The family will greet relatives and friends at church from 12PM until the time of Mass at 1PM.

To order memorial trees or send flowers to the family in memory of Myrna Schultz, please visit our flower store.