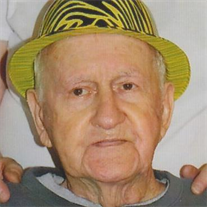 Milton B. Trowbridge, age 83, of Wautoma, passed away Saturday, Jan. 16, 2016 at Wild Rose Community Memorial Hospital surrounded by his family.

Milton served his country in the US Army from 1948 until 1953. He worked in Wautoma at the Coast to Coast Store, Fritz Sand & Gravel, operated a Frito Lay Route. He also owned and operated Milt's Standard Service in Wautoma. Later, he was employed as a forklift mechanic at Berlin Foundry until his retirement in 1996.

A Memorial Service will be held on Friday, Jan. 22, 2016 at 11:00 a.m. at Grace United Methodist Church in Wautoma with Rev. Domnik Israel officiating. A reception to follow in the church hall. Interment will be at Wautoma Union Cemetery at a later date. There will be no visitation prior to the memorial service. In lieu of flowers a memorial has been established for the Alzheimer's Association.

To order memorial trees or send flowers to the family in memory of Milton Trowbridge, please visit our flower store.