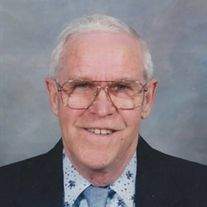 Milo L. Gunderson, age 87, of Wautoma, passed away Tuesday, July 8, 2014 at Wild Rose Community Memorial Hospital.
He was born June 4, 1927 in Wautoma, the son of George and Palma (Johnson) Gunderson. He married the former Janice Mae Johnson on April 4, 1953 in Wautoma. She preceded him in death on November 11, 1994.
Milo served his country in the United States Marine Corps during World War II. He worked at Speed Queen in Wautoma and later at Ripon for over 40 years until his retirement. Milo was a faithful member of Hope Lutheran Church in Wautoma.
He is survived by one son, Ronald (Holly) Gunderson, Wautoma; two daughters, Charlene (the late Larry) Spoehr, Phoenix, AZ, and Barbara (Allen) Shruck, Wautoma; four grandchildren, Zach (Angie) Gunderson, Ben (Jackie) Gunderson, Katie Gunderson, and Janna Gunderson, all of Wautoma; two great grandchildren, Bryn and Hannah Gunderson; two sisters, Arvilla (the late Milton) Thompson, Lancaster, and Doris (Charles) Simonson, Wautoma; a sister-in-law, Judy (the late Carl) Vanderslice, Loveland, CO. He is further survived by nieces, nephews, other relatives and friends.
Funeral services will be held on Monday, July 14, 2014 at 11:00 a.m. at Hope Lutheran Church in Wautoma with Rev. Marlin Carlson officiating. Burial with full military honors will be in Hope Lutheran Cemetery.
Visitation will be held on Monday at the Church from 9:30 a.m. until the time of services. www.wautomafuneralhome.com


To order memorial trees or send flowers to the family in memory of Milo Gunderson, please visit our flower store.