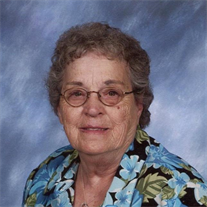 Stevie and her husband resided in West Chicago, IL before moving to Wautoma in 1976. She was employed as a secretary for the Chicago Northwestern Railroad for 10 years. Later, she was a clerk at the Wautoma Pharmacy until she retired. Stevie was a member and past president of the Women's International Bowling Congress. She also was active with Youth American Bowling Association in Illinois and later in Wautoma. She was a member of the American Legion Auxiliary in Wautoma.

In addition to her husband, she was preceded in death by her parents; two brothers and one sister.

Visitation will be held on Friday from 2:00 p.m. until the time of services.

To order memorial trees or send flowers to the family in memory of Mildred Singletary, please visit our flower store.