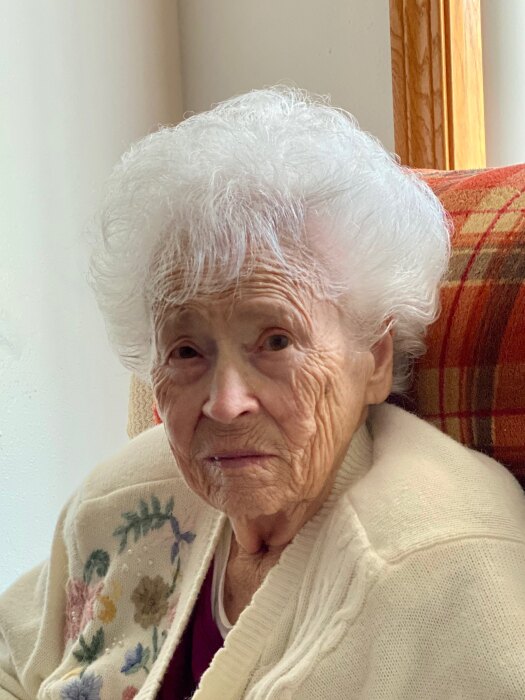 Mildred grew up loving sports and family. She and her sister Thelma were on the Marshall County Class B Championship team in 1939. Their coach was so excited that he fainted on the sidelines as the game ended! She had many fond memories of her brother Merrill and sister Thelma and their many antics as they grew up.

She earned a Stenography Degree from Capital City Commercial College in Des Moines in 1941. She worked for a year in Des Moines until finding herself back Marshalltown, IA working as a Secretary for Booth Brokerage. until her marriage in 1946.

Her marriage took her from Iowa City, where their eldest child was born, to Wethersfield, CT to Ft. Wayne, IN and back to Marshalltown, before spending her final years in Wautoma, WI.

They spent six years in Connecticut where their next two children were born. They were thankful to have two of Mildred’s sisters come live with them and help with the three little boys. Joe’s mom would send fresh eggs in an egg crate from Marshalltown to Wethersfield on the train. She even sent them an ironing board via the train!

They spent the majority of their marriage in Ft. Wayne. Their fourth child, and only daughter, was born there. Joe worked for Lincoln National Life Insurance Company and Mildred was a stay-at-home mom.  and 32 years in Ft. Wayne, where they raised their four children. She enjoyed participating in many groups, including Sigma Alpha Psi Sorority, various PTA’s and as a Deaconess at their church. She also spent much time with her two best friends, while raising their kids together. She also grew to love college basketball while living there. Her all-time favorite basketball team was the 1970’s I.U. Hoosiers, coached by Bobby Knight. She spent many happy hours watching Indiana win titles and tournaments.

In 1987, they moved from Ft. Wayne to Marshalltown. What a delight to reconnect with siblings, in-laws and nieces and nephews. They shared lunches at Arby’s every week, dinners at Ponderosa and basketball on TV. What a happy time that was!

In 2004 she moved to Wautoma to live with her daughter’s family. She was a second mom, a traveling companion, a local sports fan, a confidante and a housemate to Susan, Phil and their children. She even turned her sports allegiance to all things Badgers, Brewers and Packers. She loved winning and her teams rarely let her down. Her only disappointment with the Packers was when they would “run up the middle.” She found no use for that play. She had such strong opinions it was often hard to watch a sporting event with her. It didn’t matter if the team was winning, if she felt they weren’t playing their best she would turn the channel!

When not following her family’s activities and sports, she loved gardening. Planning, planting, growing, watering, weeding, sharing and harvesting her flowers were all things she loved. She would sit for hours on her deck enjoying the colors and the birds and butterflies that would enjoy her hard work. She had notebooks full of drawings of her gardens, and what was planted where. She and Joe both had a gift for landscaping, and it was something they enjoyed doing together everywhere they lived.

She was raised a Quaker, spent many years as a Congregationalist and attended Waushara Community Church.

She was preceded in death by her husband (1988), two beloved sons, Kevin (2016) and Scott (1983), her parents and parents-in-law, six siblings, in-laws and two nephews and a niece. She loved each and every one.

A private burial will be held at Honey Creek Cemetery, New Providence, Iowa. As Mildred would have loved, a service and celebration of life will be held this summer, when the flowers are in bloom.

Memorials may be made to the Wautoma Public Library or Heartland House CBRF, Wautoma, where she spent the last six months of her life making friends, loving staff and playing bingo!

To order memorial trees or send flowers to the family in memory of Mildred Rowden, please visit our flower store.