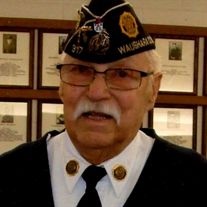 Martin "Marty" Czarnecki Sr., age 77 of Wautoma, died at his home on Sunday, September 13, 2015 following a courageous battle with cancer. He was born on January 5, 1938 in Milwaukee to Clarence and Helen (Balcerak) Czarnecki. After high school he joined the Army National Guard and in 1956 was called up for the Cuban Missile Crisis and was honorably discharged in December of 1958. Marty then went to work for the Rexnord Corp in Milwaukee as an assistant Plant Supervisor and later retired as General Foreman from Rexnord Corp. On March 18, 1961 he married Marian C. Chmielewski in Milwaukee. In June of 1961 he joined the US Air Force Reserve and was called up for Desert Storm. He was a member of the 440th Troop Carrier Wing as Hospital Superintendent. Marty was honorably discharged in September of 1991 at the rank of Chief Master Sergeant (E-9). Marty was Past Post Commander of Wolman-Minskey American Legion Post 317, Chaplain of the American Legion Riders Waushara County District 8 and an active member of other various community groups and organizations.

Funeral services will be held at 11AM on Thursday, September 17, 2015 at Waushara Community Church. Officiating at the service will be Pastor Al Spitler with burial and full military honors at Wisconsin Veteran's Cemetery, King. The family will greet relatives and friends at church on Thursday from 9:30AM until the time of services at 11AM.

To order memorial trees or send flowers to the family in memory of Martin Czarnecki, please visit our flower store.