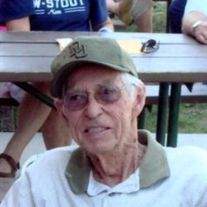 Marlyn Harold Warner, age 87, of Wautoma, died on Tuesday, October 7, 2014 at Theda Clark Hospital, Neenah. He was born on November 1, 1926 in Muscatine, IA to Lenard and Alice (Trader) Warner. Marlyn entered the U.S. Army on March 8, 1945 and was honorably discharged on December 30, 1946. Marlyn returned home and went to work for John Deere. On September 13, 1947 he married Betty Denkman in Wilton, IA. Marlyn enjoyed reading his bible and teaching others what he had learned. He also enjoyed hunting, fishing and playing cards with friends and family.


To order memorial trees or send flowers to the family in memory of Marlyn Warner, please visit our flower store.