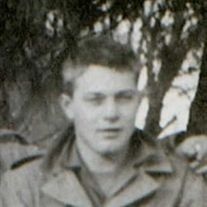 Marlin Paul Schimelpfenig, age 93, passed away Saturday March 1, 2014. He was born June 10, 1920 on the family farm west of Wautoma to Paul and Rose (Zipfel) Schimelpfenig. In 1939 he hitch hiked to California, working at MGM Studios building movie sets. He returned at the beginning of WWII and enlisted in the Army. He was in the 94th Division, 376th Infantry Company K under General Patton, serving from December 10, 1942 until October 6, 1945 achieving the rank of Staff Sargent. Marlin was awarded many citations and medals including the Bronze Star. When he returned home, he married Dorene Goodwin, the girl who wrote all those letters and resumed farming raising acres of cucumbers, broiler chickens, dairy cows, drove semi, worked in construction and spent 30 years traveling to Florida to sell Christmas Trees. In later years, Marlin and Dorene ran a small farm market, raising and selling home grown produce. Dad loved traveling, telling stories and a good joke. He could remember them all. Most of all he loved playing his drums and playing with different bands in the area. He was a generous person, providing many less fortunate with a place to stay and a good meal. This went for stray animals as well. Marlin is survived by his wife of 69 years: Dorene; children: Ralph, Marlene, Steven, Susan, Donna; stepson: Mick; 12 grandchildren; 14 great grandchildren; one great great grandchild; nieces, nephews, other relatives and friends. He was preceded in death by his parents; brothers: Lester, Herbert "Herbie" and sisters-in-law: Frieda and Wilma. A Celebration of Life will be held on Saturday, March 8, 2014 at the WWII Veteran's Memorial Building, Wautoma from 3:30PM to 5:00PM. Burial will take place at a later date in Wautoma Union Cemetery with full Military Honors. In lieu of flowers, a memorial is being established. It's not the years in your life that count, but the life in your years... ..Dad had both.


To order memorial trees or send flowers to the family in memory of Marlin Schimelpfenig, please visit our flower store.