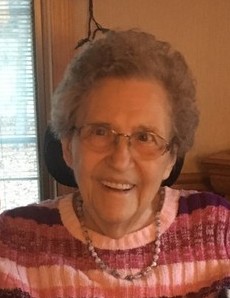 Marilyn Dawn (nee Cook) Snyder was called to eternal life on Sunday March 7, 2021. Marilyn was born on July 9, 1935, in Menominee, Michigan, to Ray and Ruth Cook. Marilyn is survived by her loving husband Jack, with whom she was married for over 60 years. Marilyn is also survived by her two sons and five grandchildren: David, wife Kathy and their children Chris, Drew and Alyson and Daniel, wife Cindy and their children Nicholas (Patty) and Justin.  Marlin, also known as Pink since birth, is survived by her twin sister Marlene Ruzicka, her two sons: Michael (Kathy), their five children and Timothy. Marilyn is also survived by nieces Vicki (Russ) Prochnow, Terry (Rick) Almandi and Wendy Heberer.

Marilyn grew up in Marinette, Wisconsin, and graduated from Marinette High School. In 1954 she moved to Milwaukee. There she attended Milwaukee Business College and then worked at TV Guide. She married Jack on June 11, 1960. She and Jack raised their two boys as members of North Trinity Lutheran where Marilyn volunteered for many years, she eventually worked as the church secretary for years until she and Jack retired to Neshkoro, Wisconsin.

Throughout the years Marilyn enjoyed many enthusiasms. She loved to bake and created many birthday, holiday and wedding cakes. She loved to go camping with her family and friends. She and Jack would enjoy spending much time with their “Fun Bunch” in their various activities. Marilyn and Jack spent their years in Neshkoro as members of Peace Lutheran in Wautoma, Wisconsin, enjoying retirement with their nearby friends who also had moved from Milwaukee and many holidays with their nearby in-laws.

In Marilyn’s final years she battled with her Multiple Sclerosis, but maintained her delightful personality until the end.  Marilyn now walks with her Lord in heaven.  Thanks be to God.

A special thank you is given to many thoughtful caregivers for Marilyn over the years especially to Crystal.

Funeral services will be held at 12PM (NOON) on Saturday, March 13, 2021at Peace Lutheran Church, Wautoma. The family will greet relatives and friends at church on Saturday from 10:30AM until the time of services at 12PM.

In lieu of flowers, donations may be made in Marilyn’s name to the National Multiple Sclerosis Society. www.nationalmssociety.org/Donate

To order memorial trees or send flowers to the family in memory of Marilyn Snyder, please visit our flower store.