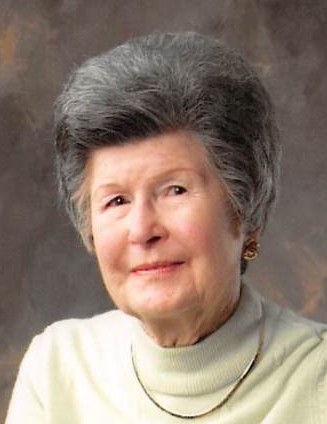 Margaret Viola Hedrick, 95, passed away peacefully on Saturday, June 22, 2019 at ThedaCare Medical Center-Berlin where she was a patient after falling.

Visitation will be Tuesday, July 2nd from 5:00 until 7:00 p.m. at Leikness Funeral Home in Wautoma. The funeral service will be held at Grace United Methodist Church, Wednesday, July 3rd at 11:00 am. Additional visitation will begin at 10:00 am at the church until the time of service.

Margaret was born on April 9, 1924 in Independence, Missouri to John E. and Frances M. (Fehr) Pollard. She was raised in Independence until she moved to Kansas City to pack bullets at Lake City Munitions Plant during World War II.

Margaret and Paul moved with their sons from Duluth, MN to Wautoma, WI where Paul Sr. started and managed the Wautoma branch of The GR Kirk Company. Margaret was the office manager at Kirk for 32 years, retiring in 1981. Wautoma was a perfect fit for Margaret and she enjoyed being very active in this community she loved. For over 40 years she was a member Homemaker’s Women’s Club (HCE), also singing and traveling with the HCE Choir. She was a longtime member of Wautoma Chapter 198 Order of the Eastern Star. Since 1967, Margaret was a faithful member of Grace United Methodist Church. She sang in the church Chancel Choir for 35 years.

After her retirement she completely filled her calendar. She enjoyed spending her time volunteering in her beloved community, spending quality time with her family and many friends, bridge games, golfing, playing the piano and reading weekly to little children. After Paul passed away, Margaret was able to find happiness again with Clair Mueller for many years until his death in 2017. Margaret and Clair, ever young at heart in their late 80’s would visit area Nursing Homes where they would entertain with music and song, what they called the “old folks”.

For the last few years Margaret had been cared for by the dedicated and loving staff at Heartland House in Wautoma.

Memorials can be made to Wautoma Public Library, Wautoma Fire Department/Dive Team and Waushara County EMS.

To order memorial trees or send flowers to the family in memory of Margaret Hedrick, please visit our flower store.