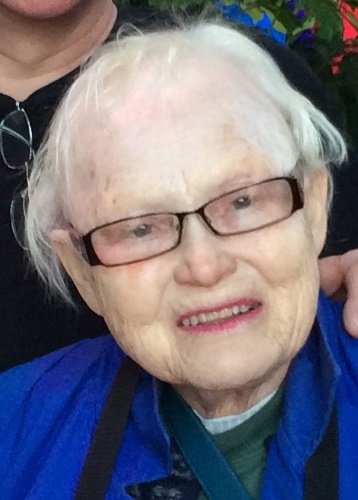 Margaret Blaisdell arrived in this world on July 4, 1928 just as the annual fireworks display touched off in Nekoosa, Wisconsin.  She took her last breath shortly after midnight, Thursday, 23 April 2020, at Juliette Manor in Berlin, Wisconsin, after several years of declining health.

Margaret was born to Arletta Ely Thirkill and Harry Thirkill, the third of four children.  She attended elementary school in Kalamazoo, Michigan, until her father’s untimely death when she was in first grade.  Arletta and the family moved back to Wisconsin (Wisconsin Rapids) where the Ely clan were centered.  The family struggled to make ends meet and it was at that time that Margaret became aware of her mother’s deep Christian faith and the power it held to give hope to life.  Margaret began reading a chapter of the Bible each night, and, within 10 years, had literally read it from cover to cover (the first time).

Margaret was determined to make the most of her life in spite of limited resources.  She studied diligently in school while working at Woolworths, local business offices, babysitting, and in the summer, picking beans, cucumbers and strawberries, with the goal of going to college.  Her dream was to study natural sciences, but attitudes in the late 1940’s dictated that, as a woman, her options were nursing or teaching.  In 1952 Margaret graduated with a Bachelors of Education degree with a major in Kindergarten/Primary from what is now the University of Wisconsin Stevens Point.  She went on to teach in Biron, Wisconsin, and later in Rockton, Roscoe and Shirland, Illinois.

Leaving Wisconsin Rapids in 1957, Margaret and George moved to Beloit, Wisconsin, and then South Beloit, Illinois.  There they lived, raised three boys, and led a full life of family, church, school, work, and leisure activities.  By 1960, they had saved enough to purchase a hole in the ground on a large lake-front lot in northern Wisconsin.  Over the course of 15 years, beginning with tent camping, Margaret, George, their boys, and George’s parents slowly created a modest cabin from where a great many adventures, fish stories, swim marathons, generational reminiscence’s, and nature immersion began and continue today.

In addition to Margaret’s deep faith, her passion for nature and learning defined her 91 years of life.  Although being a Midwestern girl to the core, she visited all 50 U.S. states and many foreign countries, spending every minute absorbing the intricacies of their history and physical and social environments.  Upon retirement, she and George enrolled in many Elder Hostel Trips, taking them to far flung places to participate in active learning experiences that eventually fulfilled Margaret’s yearning for being a natural scientist.  The highlight of her travels was a trip to Antarctica, a place that, as a kid, she could not fathom ever having a chance to see.

Margaret loved reading and singing (a life-time church choir member) but was most happy outdoors.  She did not adhere to any fitness trends, but it was a rare day that she didn’t walk or swim or both.  She also loved gardening, having a large fruit and vegetable crop for decades when her boys and George were available to assist.  She was also enthralled with birds.  In addition to enjoying the plethora of typical yard birds, Margaret never missed a chance to visit the International Crane Foundation in Baraboo, Wisconsin, to gaze upon Sandhills, and keeping close tabs on the Loon, Heron, Osprey and Eagle families that called the cabin’s lake home.  Upon moving from their home in South Beloit to Cedar Crest, a progressive retirement/nursing facility in Janesville, Wisconsin, everything scaled down, but Margaret still maintained a small patch of garden, kept her porch’s birdfeeders overflowing, and was a regular at the local YWCA.  It is fitting that her last day on earth was 2020’s Earth Day.

Her soul mate George passed away in 2004 after 52 years of marriage.  Despite her profound sadness, Margaret continued to challenge her mind and body.  She regularly took Beloit College and Rock Valley College (Rockford, Illinois) senior extension classes and was always enrolled in at least one church study group.  On her 80th birthday, her children gifted her a kayak, which she promptly boarded and paddled around the cabin’s lake.

Despite Margaret’s frustration at her slow loss of physical and mental prowess in the past seven years, she remained friendly (and talkative!), happy, and compassionate.  She made everyone who visited her at Cedar Crest and Juliette Manor, from caregivers to fellow residents, feel like it was her privilege to have made contact.

Margaret would want anyone who wishes to mark her passing with a physical memorial to donate to their most believed-in cause, or to help Juliette Manor, Cedar Crest, or the Berlin Methodist Church to continue to provide to others, as they have for her, sustenance for the body and soul.

Memories of Margaret will reside with all who met her and will scatter throughout the world as we all follow our lives paths.  Her physical remains will return to her beloved cabin in northern Wisconsin and follow in the wake of her kayak.

To order memorial trees or send flowers to the family in memory of Margaret Blaisdell, please visit our flower store.