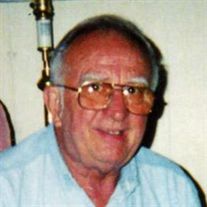 Lu was a conductor for the SOO Line Railroad in Fond du Lac for many years. He also operated Pop's Place in Fond du Lac until 1981 and then Lucien's Steak House in Pebbles, WI. Later, he and his first wife operated Bev & Lu's Bar in Richford until 1991. He enjoyed polka music and small engine repair.

In addition to his first wife, he was preceded in death by his parents, and by one brother, Charles Millard.

Funeral services will be held at 12 noon Monday, Nov. 2, 2015 at Leikness Funeral Home in Wautoma with Rev. Blaine Niskanen officiating. Interment will be in Richford Cemetery at a later date.

Visitation will be held on Monday from 10:00 a.m. until the time of services at the funeral home.

To order memorial trees or send flowers to the family in memory of Lucien Millard, please visit our flower store.