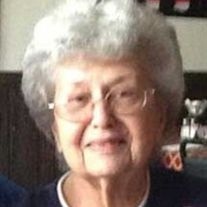 She was born July 18, 1933, the daughter of Frederick and Eleanor (Kachelek) Thompson. She married Robert W. Henkel on November 1, 1953 in Milwaukee.

Lois was a graduate of South Division High School in Milwaukee.She and her husband resided in Milwaukee for many years before moving to Redgranite in 1992. Lois was an active member and past Treasurer of Redgranite Womens Club.

Lois was preceded in death by her parents; her brother, Frederick Thompson; and by her great granddaughter, Annabelle Lemke; and by her inlaws, Walter and Lorraine Henkel

The family extends heartfelt appreciation to Dr. Robert B. Geller and staff for the care Lois received during the past year. Also, to Sally Marohn, Nurse Practitioner at Berlin Hospital for her compassion and guidance. To Katrina, Jeanne, Roxanne, Beth, Joanne and the Chaplains of Heartland Hospice. The family thanks Josiah Grothe and the staff of Heartland House in Wautoma for their loving care, especially to Mindy and Becky.


To order memorial trees or send flowers to the family in memory of Lois Henkel, please visit our flower store.