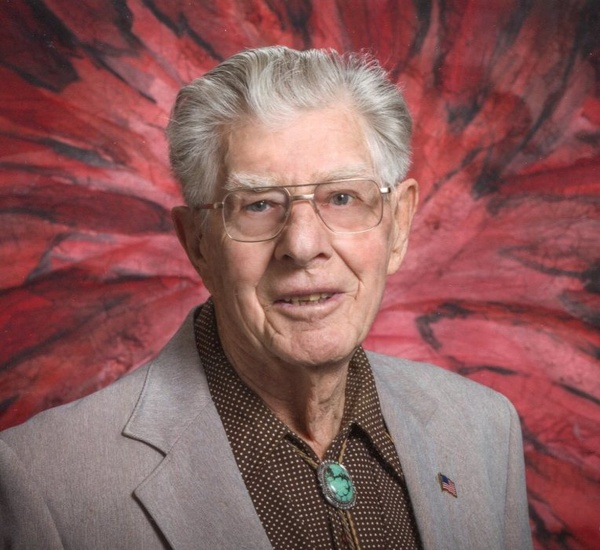 Lester Frank Van Loon, 92, of Wautoma passed away peacefully at home on Sunday, March 19, 2017.  He was born on June 24, 1924 in La Crosse, WI, the son of Frank and Tillie(Rosendale) Van Loon.  He grew up on a farm with three siblings: Marjorie Knower (Wilbur), Norman Van Loon (Mary), and Ruth Monski (Donald).

Lester served in the Army during WW II with the 11th Armored Division and the 21th Armed Infantry.  He fought in the Battle of the Bulge.  Lester experienced the horrors of war by liberating Nazi concentration camps.  He referred to the war as, “Man’s inhumanity to man.”

Lester earned a Bachelor’s Degree in Agriculture Science from UW River Falls, and a Master’s Degree in Extension Education from UW Madison.  He worked as Waushara County Agricultural Agent for 30 years.  For 10 years, Lester owned his own business making and selling seeders for green houses.  He loved feeling connected to the earth and was an avid gardener all his life.  Lester was fond of fishing, hunting, wood working, photography and volunteer projects.  He enjoyed the pleasures of a good meal, an educated mind, a clean life and giving back.

Lester was proud to call Wautoma home.  He believed in giving back to the community, often stating, “If a person draws a check from here, he ought to live here and give something back.”  He planted thousands of pine trees in Waushara County, helped secure the land for Mount Morris Hill Park, and  served as the first Park Commissioner for Waushara County.  He was instrumental in the formation of the Wisconsin Vegetable Growers Association.  For 20 years, Lester served on the Board of Directors for Wautoma Hospital.  He set up and served at many chicken barbeques for firemen and service clubs.  The Governor appointed Lester to serve for 12 years on the East Central Wisconsin Planning Commission.  Lester worked hard to improve the Waushara County Fair and fairground facilities for 35 years serving as Waushara County Fair Secretary.  He tackled needed changes for the City of Wautoma by serving as Wautoma City Mayor for 8 years.  Lester was a charter member of both Wautoma Jaycees and Wautoma Rotary and he proudly served 50 years as a Rotarian.

A memorial service will be held on Saturday, March 25, 2017 at the World War II Memorial Building in Wautoma, WI.  Visitation is at 9:00 am, service at 11 am, burial in Wautoma Union Cemetery.  A local memorial has been established in lieu of flowers.  .

To order memorial trees or send flowers to the family in memory of Lester Van Loon, please visit our flower store.