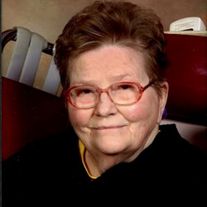 June Ellen Tackes, age 77, of Wild Rose, died Sunday, May 4, 2014 at Bethany Home, Waupaca. She was born on June 26, 1936 in Milwaukee to John and Theresa (Smith) Verburgt. June worked as a waitress for a number of years and also at Kirk Tree Company. On August 1, 1976 she married Richard Tackes in Caledonia, MN. June was very active in the Gold Wing Motorcycle Association and has traveled to 23 different states on her Goldwing. June was involved in the PTA and various school activities over the years. She enjoyed reading, gardening and was quite the seamstress and cook. June will be sadly missed by her family and friends.

Mass of Christian Burial will be held on Friday, May 9, 2014 at 11AM at St. Joseph Catholic Church, Wautoma. Officiating at the Mass will be Father Emmanuel Bialoncik O.F.M. The family will greet relatives and friends on Friday at church from 9AM until the time of Mass at 11AM. Leikness Funeral Home, Wautoma is assisting the family with arrangements.


To order memorial trees or send flowers to the family in memory of June Tackes, please visit our flower store.