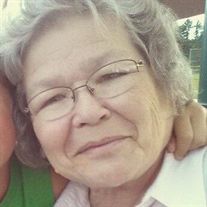 Judy Sue Albo, age 63, of Wautoma, was called to eternal life on October 11, 2015. Her death came too soon. On February 2, 1952, Judy Sue Pike was welcomed to life by her parents Lyman J. and Joyce V. (McClelland) Pike and her brother Ronald. As a young child, Judy enjoyed life on the family farm, horseback riding and picking flowers. Judy attended school in the Waushara County School District. She graduated from Wautoma High School with the Class of 1970. On December 22, 1972, Judy married Phillip D. Albo and on February 11, 1977, they welcomed their daughter Amy Jo to the world. Amy was Judy's pride and joy. Judy's grandchildren Carlie J. Gonzales and Ethan J. Clarke were the light of Judy's life. She was so proud to be their Grandma and enjoyed every second of time spent with them. Most recently Judy was excited about becoming a Great-Grandmother. Family meant the world to Judy. Judy had been employed with CAP Services for the last 34 years. She touched the lives of many children in the community. Judy will be sadly missed by all who loved her. She was a kind, loving and compassionate woman. She surely left a trace of her in the hearts of everyone she knew.

Survivors include her daughter, Amy Albo, Oshkosh; her grandchildren, Carlie Gonzales and Ethan Clarke, Oshkosh; one brother, Ronald (Mary Ann) Pike Sr., rural Redgranite; her Aunt, June Barrington, Redgranite; her nephew, Ronald (Sharon) Pike Jr, rural Redgranite. She is further survived by many cousins, close friends, and all the children she worked with. She was preceded in death by her parents Lyman and Joyce Pike, her maternal grandparents Florence and Grant McClelland, her paternal grandparents August and Jesse Pike and her nephew Donald Pike.

To order memorial trees or send flowers to the family in memory of Judy Albo, please visit our flower store.