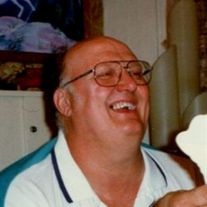 Joseph "Joe" Conrad Ernie, age 72 of Hancock, passed away on Wednesday, February 05, 2014 at his home after a courageous battle with cancer. Throughout his battle, Joe always had a positive outlook and kept his head high. He was born on August 23, 1941 in Chicago, IL to Joseph C. and Mabel (Hartman) Ernie. Joe went to work at a young age and worked in various capacities but mostly as an electrician and mechanic. On February 14, 1992 he married Karen Ann (Ryle) Reichardt in Chicago, IL. The couple resided in Lake Geneva for many years. Joe was a hardworking and loving husband, father, grandfather and great grandfather. He will be sadly missed by his family and friends.


To order memorial trees or send flowers to the family in memory of Joseph Ernie, please visit our flower store.