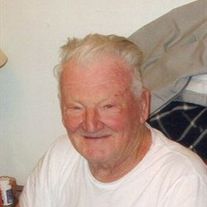 Janis Kaukis, age 92, died on Tuesday, December 23, 2014 at his home. He was born on October 16, 1922 in Latvia. He served in the German Military as a Truck Driver. Janis worked as a Carpenter for 50 years. On June 6, 1959 he married Katharina L. Betc and was married for 56 years. The couple had lived in Milwaukee and in Wautoma for the past 14 years.
Janis is survived by his wife: Katharina Kaukis; three step-sons: Karl (Arlene) Fox, Frank (the late, Mary) Fox, Roger (Evie) Fox; grandchildren: John Fox, Jennifer Fritch, Amy Ryback; many great grandchildren; other relatives and friends. He was preceded in death by his parents; son: Sibney Fox; grandson: Jason Fox and daughter-in-law: Mary Fox.


To order memorial trees or send flowers to the family in memory of Janis Kaukis, please visit our flower store.