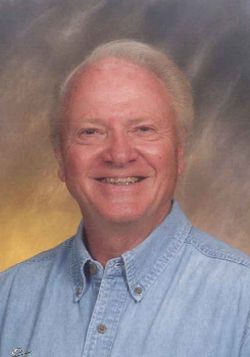 James (Jim) Francis Michaels, 78, of La Crosse, WI died suddenly of a cardiac event while doing what he loved, fishing, at his lake home in Wautoma, WI on September 12, 2017.

Jim is survived by his wife, Bette (Elizabeth) of 55 years, their children Jeff and Becky (Lund) Michaels, Chris and Vicki (Habermeyer) Michaels, Susan and Chris Olson, Michelle Segner, and sister-in-law Carol and Bob Lubinsky.  He is the proud grandfather of William, Angela, Jennifer and Christina Michaels, Annika and Emily Olson, Joseph and Casey Segner.

Jim was preceded in death by his parents, James and Dorothy Michaels, Bette's parents, Jack and Ruth Baumgartner, and granddaughter, Jessica Segner.

Jim was born August 7, 1939 in La Crosse to James W. and Dorothy (Strand) Michaels.  Jim attended Aquinas High School for 2 years and then transferred to Central High School to acquire drafting skills to prepare for an engineering career, graduating in 1957.

Jim worked at Davy Engineering, Trane Company (in Products Engineering), Hackner-Schroeder-Roslansky (HSR) Architects, and Lutheran Hospital (Gundersen Medical) as a Project Engineer overseeing building and in-house design.  Jim founded Michaels Engineering, Inc. in 1983.  He founded Michaels Fluid Balancing in 1987 and Michaels Environmental Engineering in 1993.  Jim retired in 1999 to fulfill his dream of completing the "Great American Loop" with his wife (Bette) in their boat Utopia, a trip which spanned between the fall of 1999 and the summer of 2001.

Jim gave freely of his time and was involved in countless civic and professional committees and associations, including, but certainly not limited to: Organization of the “Piston Poppers” with the La Crosse Police Department (a High School Club; Chairman of the La Crosse Chamber of Commerce Pollution Control Committee (1969-1972); La Crosse Chamber of Commerce Board of Directors (1974-1976); The National Association of the Partners of the Americas, in which Jim and Bette proudly traveled to Corn Island (Nicaragua) (La Crosse Sister City) to participate in the renovation of a medical clinic (1975); Board member of the Oktoberfest Committee (1978 - 84) and President of the Fest in 1983; YMCA Board of Directors (1984 - 1988);Viterbo University Board of Advisors; Member of Catholic Sokals; Past Chairman of City of La Crosse Harbor Commission; Boating Safety Instructor for the WI Department of Natural Resources.

Professionally, Jim was a licensed Professional Engineer, receiving his license to practice in 1974.  He was a lifetime member of ASHRAE (American Society of Heating, Refrigeration and Air Conditioning Engineers), Certified Energy Manager, and countless other certifications and recognitions.

Personally, Jim was a competitive racquetball player in his younger years, transitioning to an avid tennis player later in life.  He competed in the US Birkebeiner cross country ski race in northern Wisconsin 3 times.  Jim and Bette were both enthusiastic members of the Senate Dance Club.

As a lifelong goal, Jim was licensed as a U.S. Coast Guard Captain in 2007.

Visitation will be held on Friday from 5-7 P.M. at the Schumacher-Kish Funeral and Cremation services of La Crosse. A Mass of Christian Burial will be at 10:30 AM on Saturday, September 23rd at Holy Trinity Catholic Church with a visitation preceding the service at 9:30 A.M.  Father Rick Roberts will officiate. Entombment will follow in Catholic Cemetery. Online guestbook is available at www.schumacher-kish.com.

In lieu of flowers, the family requests memorials to the Pulmonary Fibrosis Foundation or Gundersen Health Medical Foundation.

Jim's motto in life was to "Never give up or say I can't do it".  His philosophy was "Hurdles in life are challenges - not problems".

To order memorial trees or send flowers to the family in memory of James "Jim" Michaels, please visit our flower store.