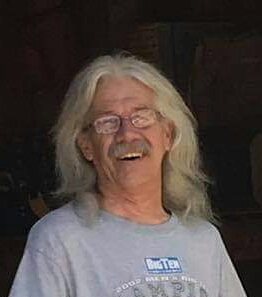 James R. "Jimmy" "Pop" Korn of Neshkoro passed away unexpectedly on Saturday July 20, 2019 in the home he loved. Jimmy was born on October 14, 1947 in Waukegan, IL to Joseph and Marian (Kolodzinski) Korn. He graduated from North Chicago High School in 1965 and was drafted soon after. He had orders for Vietnam but was sent to Korea at the last minute. He was a helicopter mechanic and pilot with the 134th Assault Helicopter Company Black Hat Demons and the 6th Aviation Combat Platoon. Jimmy met and married Susan Nichols in 1971. They had one son Jim. Susan past away in 1995 from Ovarian Cancer. He met Lori Shelp in 1998 and they were married on July 15, 2006 in backyard of the home they shared. Jimmy was a jack of all trades. He worked in a tannery, was a mold maker for Anchor Glass Container in Waukegan, ran CNC machines, worked at Kirk Company, built ultralight airplanes, dump attendant, gentleman farmer and musician. He love to tell how He got to meet Green Bay Packers President Mark Murphy and get a personal tour of Lambeau field by Mark because of Jim's dad's association with the Washington Redskins. He got to spend time with Mario Andretti and Bobby Rahal at the Indianapolis 500 because of the best neighbor he ever had. Music was a very big part of his life. He was a member of several North Chicago bands including "The Sub Dudes" and "The Outspoken Blues" recording several 45's. "The Outspoken Blues" were invited to Switzerland this August for a 60's garage band reunion, all expenses paid. He most recently became a member of "The Smokin' Crawdads" (Vinny he loved you like a brother) and a two man band, yet to be named and the strong friendships that meant so much to him.

Per Jimmy's wishes there will be no funeral. A celebration of his life is being planned for the middle of October around his birthday. Someone once said that there's something special about a musicians life. The art they create and share, the amount of people from all walks of life that are impacted, and the legacy they leave behind. Some of you may not know him, some of you have only met him once, but I bet you'll never forget. A 15th century poet, or philosopher once said that everyone dies two deaths. The first when they breath their last breath and the second when the last person who remembers them breathes theirs. You may be gone, but your imprint is far from it. Rest in peace, Jimmy. We'll all miss you. And try not to talk St. Peter's ear off. There's a brand new bass waiting for you on the other side. Rest easy brother.

To order memorial trees or send flowers to the family in memory of James Korn, please visit our flower store.