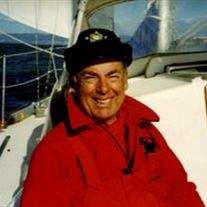 James Crawford Graham, age 90, died on May 17, 2014 at Wild Rose Manor, Wild Rose. He was born on February 5, 1924 in Cleveland, OH to Mr. and Mrs. Glenn R. Graham. James enlisted into the U.S. Army in September of 1942. He served with the 397th Infantry - 3rd Battalion in Rhineland and Central Europe Theatres where he received the Bronze Star, Combat Infantry Badge and Distinguished Unit badge. James then attended Cleveland School of Art where a earned his Bachelor's Degree in Art. In 1947 he met Elizabeth Addington while at school and the couple was later married in Milwaukee in 1995. James belonged to numerous yacht clubs where he competed in many races and won plaques. Sailing windjammers wasn't about competing to win, it was about the camaraderie. James continued to enjoy sailing thru his paintings. He will be sadly missed by his family and friends.

Private family service will be held at a later date. Leikness Funeral Home, Wautoma is assisting the family with arrangements.


To order memorial trees or send flowers to the family in memory of James Graham, please visit our flower store.