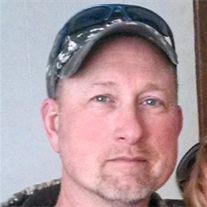 James "Jim" D. Dahl Sr., age 52, died unexpectedly on Wednesday, February 17, 2016 at his home. He was born in Columbus to Charles and Betty (Lester) Dahl. Jim graduated from Wautoma High School. On March 6, 2010 he married Cheryl Duchateau in Mt Morris. Jim was a logger and truly enjoyed spending time in the woods, hunting, fishing, truck pulls and monster trucks. Jim loved his children and grandchildren and enjoyed spending time with his family.

The family will greet relatives and friends on Sunday, February 28, 2016 at Leikness Funeral Home, Wautoma from 1-4PM.

To order memorial trees or send flowers to the family in memory of James Dahl, please visit our flower store.