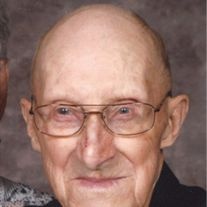 He was born April 24, 1928 in the Township of Springfield, Marquette County, the son of Adolph and Gladys (Swanlaw) Schwanke. He married Viola L. Lachelt on September 10, 1955 at St. Peter's Lutheran Church, Richford, WI.

As a young man, Jack worked as a farmhand for the Arnold Zabel family which became his second family. He was drafted in January 1952 into the 1st Marine Division fighting in the Korean War. He received a Purple Heart as he was wounded on October 26, 1952, ending his service duties in 1954. Returning to live with the Zabel's, Jack hauled can milk for Kraft Co. of Omro, WI and he worked for farmers in the Omro/Pickett area.

After marrying the love of his life, Jack and Vi moved to Sun Prairie to work for a seed corn company. They moved to Coloma, WI in 1962 which he called home. He worked for Condon Oil Company delivering gas and fuel oil, retiring in 1992 after 30 years. In addition to Jack's commitment to his career, he served the Coloma Volunteer Fire Department from 1962 until 2014 in various roles. Jack was instrumental in getting the Coloma Fire Department memorial stone set in place at the entrance of the Coloma Fire Station.

After his retirement from Condon Oil Co., Jack further helped area farmers in the summer and fall months. He was an avid gardener and enjoyed sharing his harvest with many. Jack enjoyed open water and ice fishing through the years, especially with family and friends. He took great pride in his work and had many gifted abilities. Mostly, Jack was a family man who loved and enjoyed spending time with his family.

He was preceded in death by his daughter, Donna; his parents; his in-laws,
Fred and Linda Lachelt; sisters-in-law, Ruth (Rudy) Lobby and Claire Schwanke; brother-in-law, Sam White; and by two nephews.

Funeral services will be held on Wednesday, February 4, 2015 at 11:00 a.m. at St. Peter's Lutheran Church, Richford with the Rev. Blaine Niskanen officiating. Burial with full military honors will be in Richford Cemetery.

Visitation will be held on Tuesday from 4:00 until 7:00 p.m. at Leikness Funeral Home in Wautoma and on Wednesday at the Church from 10:00 a.m. until the time of services. In lieu of flowers, a memorial is being established.

To order memorial trees or send flowers to the family in memory of Jack Schwanke, please visit our flower store.