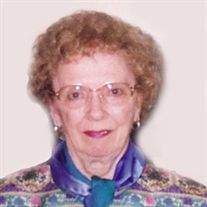 Ione was a graduate of Waushara County Normal School and UW-Stevens Point. During the war, she worked at a defense plant in Racine for three years. Later, she taught school for 30 years with the last 20 years at Nekoosa Elementary School.

She loved to bake, especially pies, which she made from scratch. One summer, she made over 80 pies. Her late husband delivered them to family, friends, and neighbors. She was also a talented artist.

In addition to her husband, she was preceded in death by her parents; one brother, Jim Sullivan; three sisters-in-law, Betty Sullivan, Edna Sullivan, Caroline Buchanan; and by her brother-in-law, Fred Bollhoffer.

Funeral services will be held on Saturday, Oct. 18, 2014 at 11:00 a.m. at Leikness & Stahl Funeral Home in Plainfield with the Rev. Eric L. Hambrock officiating. Burial will be in Hancock Cemetery.

Visitation will be held on Saturday from 9:30 a.m. until the time of services at the funeral home.


To order memorial trees or send flowers to the family in memory of Ione Buchanan, please visit our flower store.