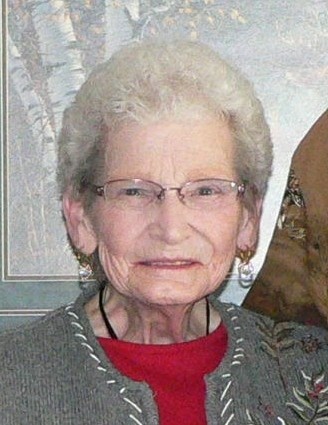 Iona Jean was a graduate of Westfield High School. She was employed at the former M&I Peoples Bank in Coloma for many years until her retirement. She was a faithful member of Calvary United Methodist Church in Coloma where she belonged to numerous parish committees, served as president of the United Methodist Women and taught Sunday School. Iona Jean will be fondly remembered for singing with the Eighth Notes Double Quartet of Coloma. She also belonged to the Yarn Club of Coloma.

Iona Jean loved watching the Packers, Badgers and Milwaukee Brewers. She enjoyed working with her flowers and being surrounded by her family. She was also an avid reader and belonged to the Library Club.

In addition to her husband, she was preceded in death by her parents; her great grandson, Ethan Drews; her son-in-law, Norman Kemnitz; and by one brother-in-law, Jerry Enns.

To order memorial trees or send flowers to the family in memory of Iona Jean King, please visit our flower store.