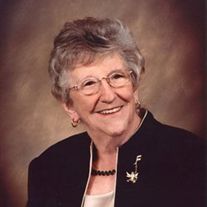 She was born on May 28, 1925 in Huntsville, Alabama, the daughter of Marvin and Fannie Henshaw. She married Martin Schliepp on February 28, 1948 in Rome, Georgia. They made their home in Coloma.

As a young woman, during WWII, she worked on submarines in Connecticut. She was waitressing in Rockford, IL where she met Martin. Martin and Faye operated the Texaco Station for many years where she prided herself as the first woman in Wisconsin to pump gas and check oil. They also managed the former North Side bar as well as Sunset Point Resort on Pleasant Lake.

Faye's passion was cooking. She worked for many restaurants in Coloma, operated her own diner, and catered food for many events. She was a waitress at the Royal Café until age 83! She was also a member of the Westfield School Board and the Village Board of Coloma. Over the years Faye also enjoyed spending time with family, traveling, bowling, watching the Brewers and Green Bay Packers as well as her favorite NASCAR driver, Jeff Gordon.

She was preceded in death by her parents; husband: Martin; brothers, Clarence and William Henshaw; sisters, Carleen Stone, Lillie Newby and Ruth Towery.


To order memorial trees or send flowers to the family in memory of I. Schliepp, please visit our flower store.