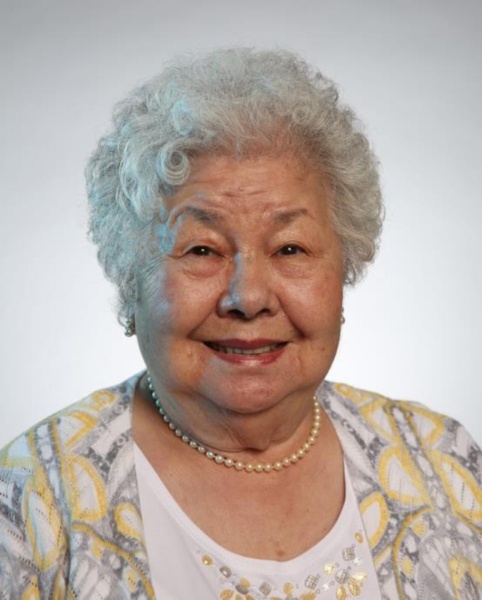 Hiroko was born in Osaka, Japan on June 20, 1932 to Sotokichi and Hatsuko (Sakamoto) Yamamoto. Her family moved to Kyoto, Japan when Hiroko was three years old, and she remained there until she graduated from high school. After high school, she began working at a department store in Kyoto, where she met her future husband, Don, who was serving in the U.S. Marine Corps during the Korean War.

Hiroko and Don were married at the U.S. Consulate in Kobe, Japan on August 17, 1954. Following that, they celebrated a Catholic marriage service on August 19, 1954. When Don was discharged from the Marine Corps in 1956, they moved to Hiles, Wisconsin, where they resided until 1983, when they moved to Wautoma, Wisconsin. While living in Hiles, Hiroko worked as a hostess at the family business, Woody’s Supper Club in Crandon, but she spent most of her life devoting her time and talents to her five children. In January of 1986, after years of hard work and studying, she proudly became a citizen of the United States.

In the words of her family, Hiroko was the strongest and kindest woman that lived. She had a generous spirit, always giving and helping anyone who needed anything. Her smile was infectious and there was rarely a time when she wasn’t smiling, right up to the point of her death.  Everyone she met loved her, and she leaves behind a legacy of grace and dignity. She was truly a living angel on Earth.

The family will receive friends on Saturday, May 18 from 9:00 a.m. to 11:00 a.m. at St. Joseph Catholic Church, 364 S. Cambridge Street, Wautoma, Wisconsin, followed immediately by a funeral service and a luncheon at the church hall.

To order memorial trees or send flowers to the family in memory of Hiroko "Nancy" Roberts, please visit our flower store.